If I had been gauging all half marathon experiences by my experience at the Disney Half, I'm not sure I would have take a second foray into the world of half marathoning. But I had been doing some promotions work for the folks who promoted the ING Miami marathon and half marathon, and had earned free entry into the race... so why not take advantage of it?

Unfortunately I had a lot going on. I had returned from my first half marathon with the flu. I was supposed to be finishing the final preparations for my doctoral comprehensive exam, but instead I was stuck on the couch for 2 weeks, drinking hot toddies of Honey Jack with lemon, in the hopes that it would quell my cough. Of course I'm an idiot and didn't realize that I had the flu until it was too late for Tamiflu, So I had no choice but to let this sickness run its course.

And I had other stressors in my life too (aside from spending the 2 weeks between Disney and ING wasted on the couch and nursing the sore groin that had acted up at Disney). I was also right smack in the middle of my qualifying exam for my Ph.D. program... an exam which would determine whether I was eligible to begin writing my dissertation or not. This exam was a 3 part exam, each consisting of a 24 hour period, which ran Tuesday, Thursday and Monday. The ING would provide a good study break on the Sunday smack in the middle of the exam period... but it was also an added stress.*

On the morning of January 27th, Ray and I once again woke up at 3:00 am to be out the door and at our friend Shannon's house by 4. On the way out the door, I grabbed my bagel and was upset to realize that we didn't actually have any bananas (which had become a pre-race staple for me). I shook it off thinking no big deal, and made a mental note to plan better next time.

At Shannon's house, we met our friend Steve-Dave, and then we all drove down to Miami together. Parking and finding our corrals was uneventful. We said goodbye to Shannon as she split off from us to find her own corral.

Ray wasn't planning to run the race with me (because he said he would only do one half marathon per year and we already met that quota with the Disney half), but as Steve-Dave declared a similar anticipated finish time, he remained with me until the start of the race.

I was nervous about running another race alone (Steve-Dave would leave me after our corral actually started). I was jittery about running when I'd spent the past few days coughing up stuff straight out of a Mucinex commercial. I was worried that my inhaler just wouldn't cut it. And really? I had to pee???? Why is it that no matter how many times I hit the bathroom before a race, I always have to go immediately before the race is about to start?

I briefly debated running to the port-o-lets, but I knew that I wouldn't have enough time to make it back to Steve-Dave before the start of the race. I thought about just throwing in the towel and not running at all. I wasn't feeling well, afterall. I knew nobody would hold it against me if I decided to just go sit this one out.

But then I thought about it a little more deeply, and reminded myself that I've sat out most of my life. Starting and not finishing is far better than not starting at all. 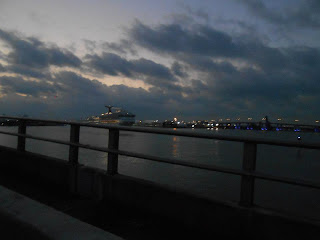 And so when our corral crossed the start line, I popped a cough drop in my mouth and I started. Steve-Dave had said that because he was a little under-trained, he would hang with me for awhile. But before we even got to the first 0.1 mile to turn onto the MacArthur Causeway, he was already pulling away from me. I told him to go ahead without me, and began the climb. The cough drop was working its magic, and I felt good. The sun rose over the seaport, and we saw the gorgeous view of the cruise ships, and I felt great. I had a little achiness in my groin, but that was to be expected.


The MacArthur Causeway to the beach was long. But somewhere along the way, I managed to get into a groove. I talked to a couple other runners, and we shared some motivational words. I would pass a girl, then she would pass me, then I would pass her again. She would wind up playing a crucial role in my finishing. Everytime that I felt that I was losing pace, I would look around for her and gauge myself by wherever she was. Sure, I had my Gymboss interval timer, but I tend to use other people as markers when I am on a course. Not really ideal, but I haven't been able to break myself of this habit yet.

For the first time ever, I was wearing a skirt (Running Skirt brand). I really liked how regulated my body temperature seemed to be without my usual capris. I had applied liberal amounts of Body Glide between my thighs before the race, but around mile 6, it began to wear off, and I was chafing something fierce. At the mile 7 med stop, I grabbed some vaseline and applied liberally. I hate the feeling of vaseline and until it gets sweaty, I find that it only makes my skin stick more than it actually prevents chaffing. But sometimes you gotta do what you gotta do. And at that point, I was getting desperate.

Once that mess cleared up, I got back into a groove. The course was gorgeous. The weather was awesome. Other than the chaffing, I felt really good. Until I hit the Venetian Islands and Causeway heading back toward downtown Miami between miles 8-10. Prior to this race, I hadn't had a lot of experience driving through this area, so running it felt fairly new to me. I had expected a couple of large bridges, but instead, it was like a big joke. I thought that was the last bridge, then suddenly, I had another to run over. Then I thought that was the last one, and then there was another. And on. And on. And on. Forever.

Finally, the end of the bridges was in sight. I was on the descent from the final bridge and on track to beat my Disney time by about 15 minutes, when out of nowhere, my left calf seized up. I took a couple of tentative steps to try to shake it off, but the pain quickly shot throughout my body. Before I knew it, I was seeing myself in slow motion, losing my step and falling to the ground. I didn't have time to put my hands out to catch myself, and it was certain to end in a bloody mess.

And out of nowhere, I feel hands underneath my arms, and a voice over my shoulder saying "I gotcha." The 2 women walked me to a nearby police officer and handed me off to him. He started to radio for help, but I asked him not to. I knew I'd be ok, and I really just needed to stretch my seizing muscle.

After about 5 minutes, I was on my way again, this time resorting to walking. I made a mental note to never skip my pre-race banana again, and maybe not to spend the week before a race dehydrating myself with whisky. I tried my best to shake it off, but the reality was that I was devastated that this was my second half marathon and I found myself (once again) walking the last 3 miles. I had ONE goal in mind when I started this race, and now I was sure that I wouldn't reach it.

All I wanted was to finish this race 2 minutes faster than my Disney 3:35:28.

That would translate to 11 seconds per mile, and up until the cramp incident, it felt like I was going to blow that time out of the water. But now, I wasn't so sure. Now, I'd be lucky if I'd even make it across the finish line. 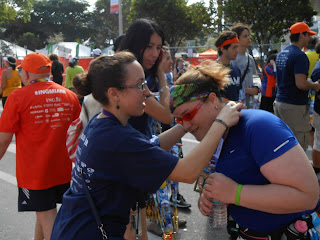 At mile marker 11, I passed Ray who was cheering me on. He gave me a couple Twizzlers to help boost my morale. Twizzlers on a race are like Mana from the Heavens, and immediately they began to help lift my spirits. Seeing him was really nice too. He is such a supportive, great man.

Another 2.1 miles through the city streets and we were at the finish. Coming into the final chute, I saw the girl I had been using as my pacer during the early part of the race. I plowed through my pain and sprinted to her side. And we crossed the finish line together.

Actually it was over 3 minutes faster.


*The next day, I returned to school to finish my exam. It would be over a month before I got results, but I guess the study break worked... because I passed!
Posted by Amy M. Guimond at 9:56 PM