You could probably call this the race that almost wasn't. In fact, for many half marathoners, this race actually wasn't, but not for me. The race was officially cancelled about 10 minutes before the half was supposed to start, but I ran it anyway... Let me explain...

A couple of years ago, I met an ultra runner whom I greatly admire. She's strong, she's tough. She's much faster than me, but I'm not sure she would be called elite. She is absolutely elite in my eyes, but that's because she's such a running beast. On top of that, she's supportive... even for a turtle like me. When I heard about the Revel Rockies race near her home in Denver Colorado, I asked if I could plan a trip to visit. And soon, another friend of mine decided to make the trip to Colorado with me to also run the race.

Having lived in Florida for the past 10 years, and having had asthma for the greater part of my life, and having heard horror stories about altitude and having experienced altitude issues myself while in Utah last summer, I knew that I needed to plan accordingly. I didn't have a lot of time, but the plan was to fly to Denver on Thursday, accompany my 2 friends to Aspen and spectate the Aspen Marathon, thus allowing time to acclimate. Then one Sunday, we would meet up with another friend flying in from California, and we would run the Revel Rockies Race. 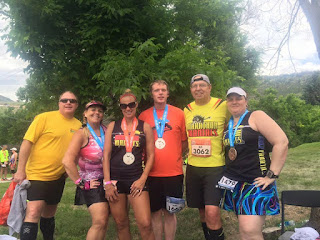 Unfortunately, although packet pickup was smooth and seamless, race morning was an absolute disaster. The race was point to point starting at the top of a canyon, so we had to meet busses early in the morning to take us from parking to the starting line. My friend from Colorado was running the full marathon so she had to meet her bus earlier than the rest of us, so we arrived at the parking lot super early. We waited in the car after she left to catch her bus, then we saw a line starting to form for the half marathon buses. It was bitter cold, but we donned our plastic bags and went to stand in line for the buses.

During the next hour or so, I only saw a total of 5 buses, and they were all for marathoners. We waited and waited. We knew it was about a 20-30 minute drive to the starting line and we all started to get antsy when we knew that start time was fast approaching and the buses still never came. It was like Waiting for Godot. about 15 minutes before the race was scheduled to start, one of the volunteers came to tell us that they were trying to figure out the game plan because the buses never came, and they would update us. Less than 2 minutes later, we watched in shock as we saw all of the people in front of us scatter and start running back to their cars. We looked around confused for a few minutes, unsure of what was happening and meandered to where the front of the line had been. And on the way, my Florida friend learned through a post on the event organizer's facebook page that the half marathon had been cancelled.

I was in shock. I think had I not been so cold and tired, I might have been more upset, but at first, I just stood there dumbly. Until the frustration set in. I had spent a LOT of money on airfare, and expenses. I had taken unpaid time off of work. I had acclimated (although not well because I really wasn't feeling well). I didn't want to accept cancelled as an answer.

I'm not officially a member of the 50 state half marathon club yet (though I plan to be before the end of the year), but they have some guidelines for what counts as a race. As a member of half fanatics, there are other guidelines. My friends and I quickly brainstormed what we would have to do in order to be able to still run a half marathon and have it count for both clubs. We tried to rope others to drive with us to what should have been the start of the race, and run it with us anyway... But they wouldn't. 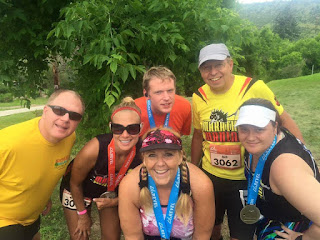 Eventually, we learned that if we could get ourselves to what should have been the start line within the next hour, we could still run, although we still didn't know whether our times would count, whether we would be entitled to course support, and whether we would get medals at the finish. We didn't know whether others were running the course also, so we didn't know if there would be the required 20 starters that the half marathon clubs require. But we were willing to gamble.

We piled into the rental car and drove to the start line, leaving our car in a frozen yogurt stand parking lot. We would worry about the logistics of retrieving it later. We looked what should have been the starting line and saw that there were others with the same idea.

We jumped on the course and started running.

My race was off from the start. As a back of the packer, I knew that I might be without other half marathoners for most of the course anyway, but with no real pack, I was literally on my own from the word go. Although there was a bit of a crowd (the same logistics that cancelled the half marathon messed up the full marathon and the crowd was really small), I never actually felt like I was running a half marathon. 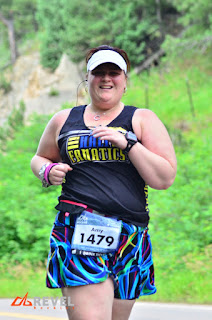 Instead, I was left feeling like I was doing a 13.1 mile training run, crashing the course of the full marathon. The course was gorgeous, but I was too sick and dizzy from the altitude to really enjoy it to the fullest. Other runners would pass me and realize that I was a half marathoner and ask what had happened, but I didn't really know. All I knew was that I was on my own... and it was tough.

Although I had allowed myself to acclimate, I stupidly thought that I might even PR this race because it was almost entirely downhill and was billed as a really fast course because of the altitude decline... but instead, it was the opposite. By mile 9, I was nursing a really ferocious headache. By 10, I was dizzy and nauseous. By 11, I felt like a jackhammer was splitting my skull open. By 12, I was delirious. I sat down on a guardrail to catch my breath and contemplated the race. I wanted to finish more than anything. But I also knew that I was sick. I took a selfie and realized that my lips were turning blue.

I quickly did a little math in my head. I'm no mathematician, and considering how out of it I was, I'm not sure how accurrate this was, but I remember thinking I had at least another hour for the course to remain open (if I was allowed to finish the race considering that technically I was a bandit on a cancelled half marathon). I weighed my options. If I quit due to the altitude (which would have been a respectable quit in retrospect), I would have to spend all that money again. I would have to acclimate to the altitude again. I would have to do the entire race again... and it just wasn't worth it.

So I sucked it up. I finished, but that last mile took me a ridiculously long time... almost a half hour to be exact. The course was kind of jacked in that it ran a little long, and the final stretch was back uphill after a steep and steady decline through the canyon. That seemed a little sneaky to me, but who I was I to complain. 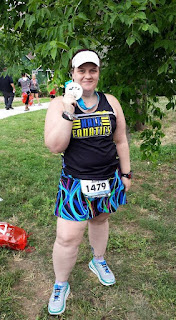 I crossed the finishline, and immediately sought out medical. I've never seen a setup like this before. Medical was not immediately at the finishline, you had to go over a guardrail and down a little hill to get to them... and I didn't see them immediately and started to panic... which of course only heightened my problems. Another runner saw that I was in distress and escorted me to medical. Where I promptly took a breathing treatment and sat for awhile on oxygen. I think that I might suggest that should this race series return to Colorado they revisit their setup for finishline. food trucks do not need to be immediately on top of the finishline, medical DOES.

In the end, although it was a rocky start, and although I never really felt like I got the experience I was looking for, it was a state that I finished. Not every race can be excellent and run smoothly... But I finished, and that's all that counts. There will be other races on other days.

Email ThisBlogThis!Share to TwitterShare to FacebookShare to Pinterest
Labels: 50 States, asthma, Half Fanatics, half marathon, never again, not so smart